Do you have a favorite ornament on your tree? Is is the one your child made when they were in kindergarten? Maybe a handprint? Or an angel made out of a coffee filter? 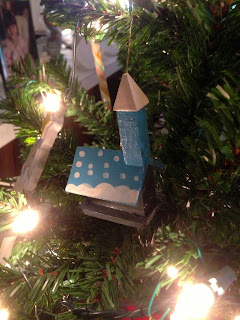 I have a favorite. It's one with a story befitting this season of giving. It's a little blue church.


My boyfriend (at the time) decided he wanted to give me a present early because my daughter was coming to stay for Christmas and he wanted to be alone when I received this gift.

Already my heart is fluttering? What could it be? We'd only been living together for six months. We'd known each other a heck of a lot longer than that.

So, I sit on the sofa and he plunks down a large, heavy box on my lap. It's wrapped in bright Christmas wrapping paper.

My feeling soar a bit, as anything this big, isn't going to be worth cooing about. So, I open the box. And I find another box. So, I look at my boyfriend strangely and open the next box.

Yep, another box. This time I'm not trying to hide the stupor from my face. I'm not sure what to expect in the next box.

The next box, is a box full of weights and a message taped to the lid.

So, off I go on a scavenger hunt through our apartment to find my gift. I'm lead around the house, from hint to hint:

Many of the hints I can't remember,  but I'll let you know which ones I do:

"It's warm glow keeps my face tanned." - his computer

"It makes the hot cold, and the cold hot."

"Look between the hum and below the splash." - our aquarium

"When the frost grows it gets hotter."

"It's surprising that I'm not sitting there now." - his computer chair

"Try looking under the creature with no legs."

"Look for the one that's been broken but fixed."

"Does the light really turn off when the door is shut?" - the refrigerator

"It's not here year round." - The Christmas Tree

"Look below the angel and above the water." - Something on the tree

I was getting close, and a bit tired of the game, but realizing that if there was something on the tree for me, then it was hanging on an ornament. Could it be a necklace or a bracelet?

I looked hard, until I found the little blue church. Taped to the bottom of the ornament was another note. This note said,

"turn around" Simply that. "Turn around."

So, I did. And, there is my love, my friend, my forever on his knee, holding up a ring box with another note:

"Loves you very much."

He was offering his heart as his gift. I accepted gladly! And with lots of tears!

The ring was absolutely gorgeous! A single diamond at the top and diamonds running down each side. It was so beautiful.

I said yes as soon as the tears could slow down enough for me to get a word out. Of course I said yes. And wouldn't you know it, we were married two years later.

And, we've been together ever since. It's been seventeen years since that scavenger hunt. And he still does goofy things. Most of which I share with you on my blog. But, he does tender, loving things as well.

Those I keep secret in my heart.

Awww :) It sounds like you guys have a lot of fun together!!

What a great story! No wonder that ornament is so special to you! I just stopped by from SITS to say hello; hope you find time to do the same.

Thank you for sharing your beautiful story. What a fun thing that you have an ornament to remember it all by. Every Christmas it must be a fun moment to take that ornament out.

Dear Rebecca, Eva, and Misssrobin: Thank you so much for stopping by and commenting. Yes, the little blue church holds special memories. As does that magical day of scavenger hunting.

He still surprises me on a daily basis with all the love and support he gives me.

Beautiful! Love that story. My hubby planned a scavenger hunt for me one Christmas years ago and at the end were diamond earrings. I had forgotten. But thanks for reminding me! Gave me warm fuzzies!

Dear ShaunaQ, aren't our DH's just the best when they come up with something so creative?