Dressing Up for Christmas – Doggy Style 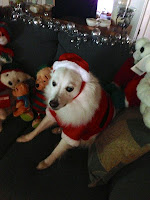 Admit it. If you’ve ever had a dog, you’ve either been tempted to, or actually did dress your dog up for Christmas. Either with something on the head like a Santa hat or reindeer antler or you went full out and put your dog in a Santa suit, Elf suit, or something similar.

Usually, my American Eskimo dog, Jack only has to endure a headband with reindeer antlers or something like a bandana or collar with bells on it. I even have a Santa hat for him that he shakes off because the darn pom pom gets in his face.

However, my mother-in-law sent a full red and white Santa suit, including black belt and a Santa hat.

I dressed up my dog, Jack, as Santa.

The poor thing thought he was being executed and denied his last meal. He looked that pitiful in his pictures. 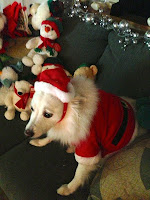 Look for yourself. Doesn’t he look pitiful?

After the obligatory pictures were endured, we went in search of “daddy” to show off. Jack only wanted the silly suit off, so I got him out as quickly as I could, without his help. If I’d let him help, the suit would have been in shreds.

Later that day, I heard Jack in the Great Room huffing and barking. That usually means he wants something and he can’t reach it. Mostly balls under the sofas or chairs, or a long forgotten treat rediscovered.

This time I found him staring up at the Christmas tree and the presents under. One of which was a very large candy cane shaped rawhide bone. 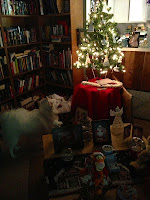 Darn. He found it.

Our tree is on a high glass-topped table, and I didn’t think he’d figure out his present was already under the tree. 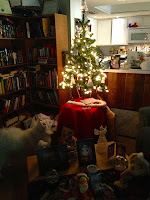 All to no avail. As you can see by his picture, he was very determined.

What I needed was a distraction. Otherwise, he was going to start opening up other presents that did not have his name on them.

So, I searched for a distraction. I spied my cache of rawhide bones and gave him a brand new one. 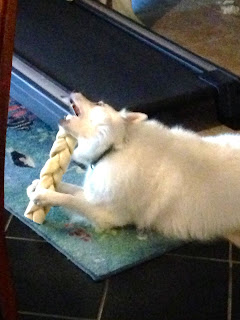 I wonder for how long, though?

Merry Christmas to you and your furry friends!