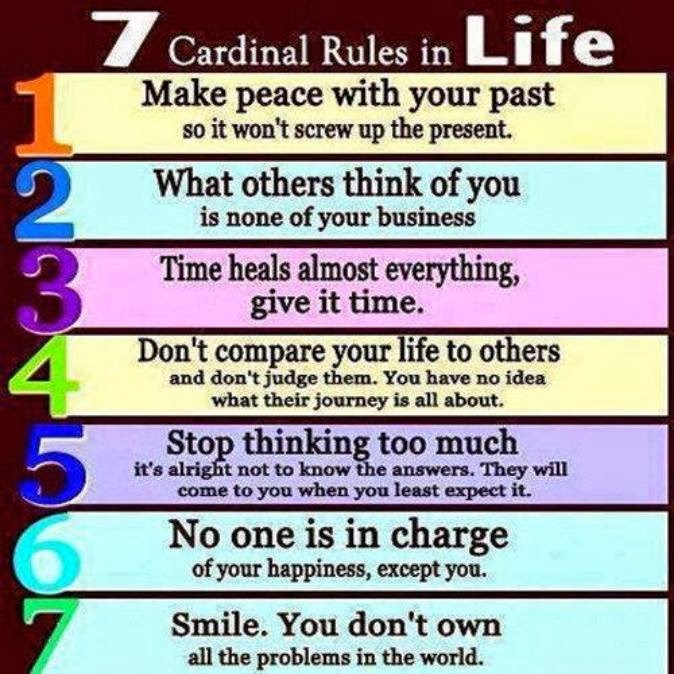 I've found out that there are seven cardinal rules in Life.

Did you know there were seven? I thought a lot more. But, here we can distill it down to seven. I'll help you out.

5. Stop thinking too much. It's alright not to know the answers. They will come to you when you least expect it. Whoa. Pretty big one, eh? Least used sentence in the world: "I don't know." Everyone thinks they have to have an answer. It's okay to say, "I don't know."

4. Don't compare your life to others and don't judge them. You have no idea what their journey is all about. That's really what it's all about, right? Not knowing what the other person's journey is? I get that. I have Bipolar Disorder, I don't expect anyone else to understand that, regardless of walking a mile in my shoes. But, in return, I don't want to change shoes with you, either. I'm comfortable in mine. Yours might pinch my toes.

Besides, the Bible says that Christians are not to judge each other. So, don't. Okay?

3. Time heals almost everything, give it time. That's a good one to think about, don't you think? We really need to just give some things enough time to work themselves out and heal.

2. What others  think of you is none of your business. I had to re-read that sentence a couple of times before it made sense. Now it makes perfect sense. I don't care what you think of me, it doesn't matter. The only person who is subject to my thoughts is God. He thinks I'm a pretty darn good person. I happen to agree with Him. Enough said.

1. Make peace with the past so it won't screw up the present. I guess I know why that's number one. It's a big point to make. It's all about forgiveness. You forgive yourself. You forgive others. You forget your past. It's done, over. Move on.

So, those cardinal rules aren't so bad. Can you live with them? Now that I've gone through all seven, I think they're worth living.