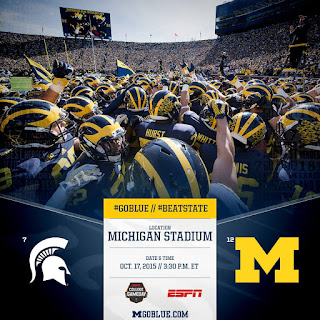 I'm not normally a college football fan. And, I don't follow the schedules or even watch them on television. But, when a particular game comes around every year, I turn into a different person. That game is the Michigan vs. Michigan State game.

I was born in the Upper Peninsula of Michigan and grew up in Muskegon. I don't know how or why we/I became a University of Michigan fan, but it's been in my blood since I can remember.

Living in Florida now, I haven't even been back to Michigan in 34 years, but the connection of this game is what keeps reminding me I am a Michigander.

According to Greg Stephenson at http://www.al.com/sports/index.ssf/2015/10/what_tv_channel_time_is_michig.html

According to Stephenson, what's at stake is this: "The winner becomes the top threat to Ohio State in the Big Ten's East Division and a serious contender for college football's playoff — and yet all that feels secondary. What's at stake this weekend is Michigan State's seven-year dominance of the rivalry it cares about the most, a run of success that is now in serious jeopardy with Jim Harbaugh coaching at Michigan."

According to Bill Connelly from SB Nation "MSU has won six of the last seven against Michigan and still ranks higher than the Wolverines in the polls. But if the numbers are any indication, Michigan has a chance to swiftly create a new narrative."

Of course, my bets are on Michigan.

The rivalry between the two teams and their fans/students starts long before the game. According to Russell Westerholm, from the University Herald, "The rivalry is coming alive this year with Michigan State ranked seventh overall and shares a lead with Ohio State, Michigan, and Penn State for the lead in the Big Ten East at 2-0 in the conference. Michigan State is also 6-0 overall and has been ranked in the AP poll as high as second.

Since losing its opener to Utah, Michigan has held its next two opponents to one touchdown each before shutting out its last three opponents. Michigan State's offense may challenge the Michigan defense the way Utah's did, but Vegas odds makers are favoring the Wolverines at home nonetheless."

This is great news!! The Wolverines are the favorites for this game!!

So, get your game face on, paint it blue, or just flop on the couch and tune into ESPN. It's going to be one heck of a game.

If you'd like to visit more pages about the University of Michigan try:

Of course their FaceBook page has great pictures and lots of game day information.

I'd like to introduce Jane True. A writer friend of mine who is my guest blogger. She wrote this piece and I felt compelled to post it on my blog. I hope you like it as much as I did. 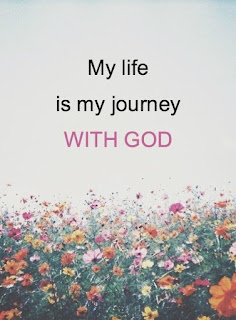 Many a Christian has read the Bible from cover to cover, I’m not one of them, but am in the process of joining their ranks.

My Protestant Bible of choice is the King James Version. Modern translations are abundant, but in my opinion, pale in comparison to the beauty and majesty of the King James Version. Its unique Biblical English is almost a language unto itself and is derived from late sixteenth and early seventeenth  century  translators, more interested in being faithful to original manuscripts than in making their translations in the street language of the day.

Most reading programs suggest starting in the New Year, but I missed January by four months.  With May 1st as my start date I was already 120 days behind. If you factor in the fifteen minutes required reading each day and divide it by , oh never-mind, you do the math, it was a lot of catching up to the current date which I didn’t accomplish until the middle of July.

There are sixty-six books comprising the Old and New Testament. Interestingly we started at the third chapter of Ecclesiastes perhaps because it dealt with all the times to be born, die, plant, pull up, kill, heal, you get the point. I still question why King Solomon wrote such a mournful piece with all that God had given him.

I admit I am like a thirteen year old boy when it comes to the feats of Joshua, David and Daniel. Once I figured out David’s exploits were reiterated in the book of 1st Chronicles I could sit back and enjoy the read.

Of course that was before I delved into Ezekiel.

The Bible is anything but boring. Bad guys, good guys, good guys gone bad. Promises man made to God, promises broken by man with disastrous results. Wives who dealt in subterfuge to push their sons and husbands ahead, a prostitute that saved the day, a racy love poem, and thank goodness in-between the respite of The Psalms and even they sometimes call out for vengeance.

That’s the Old Testament synopsis; the New Testament is new because it presents an avenue for a relationship with God as manifested through Jesus Christ. Using the Old Testament as a backdrop, the New Testament is a reminder of the futility, the impossibility, of pleasing God by man’s merits.
I’m glad I pledged to undertake the journey of studying this collection of books that embraces Spiritual enlightenment and marches through history by faith and by golly. This book spans the ages from the beginning of creation, the forming of the nation Israel, to the Son of God, Jesus, walking on this earth, and concluding with a tantalizing glimpse of the future, which is not the end but a new beginning.