My Fantasy Dream - The Elevator 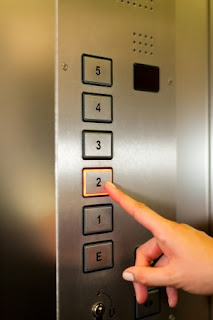 I quickened my pace, dragging my suitcase behind. Every third step it banged my heel, nearly causing me to trip. I refused to slow. The elevator doors filled my view. Nothing else mattered, only making the next elevator car so I could get out of this airport.

There, the doors opened, I could make it, if I hurried. Damn, this suitcase. I stopped dragging it and picked it up, shaking it for a second as if it were an insolent child dragging its heels. I would not wait for another car.

The shiny doors began to close. I leapt toward them, pushing my arm through the narrowing space between them. The doors stopped, retracted, and then opened. Finally. I made it.

I pushed my suitcase ahead and tossed it to the floor as I fell against the cool wall to catch my breath. As I pushed number nine I noticed number seven was already lit.

“Ow, excuse me,” a soft, low, deep voice made its way through my foggy senses.

“Oh, sh--, uh, sorry for the suitcase, I really wanted to catch this ele— “ then I looked up into the most awesome, clearest hazel eyes I had ever seen.

As he bent over to remove the suitcase from against his jean-clad shin, I looked down at his soft brown hair, peppered with an abundance of gray streaks. Just like I had always imagined.

In the next few seconds, my mind raced as my hands straightened, tucked, and smoothed blouse and hair. What do I say? I threw my suitcase at him? My God, he must think I’m an idiot!

With strong hands, he hefted my suitcase to its upright position and sat it gently next to me. My legs nearly buckled when he brushed his hand against my arm and asked, “okay?”

All I could do was nod with a silly grin plastered on my face.

“You probably wanted to ride the elevator alone, huh?” I cringed as the words left my mouth before I could think.

He laughed. “Well, that was my first intention, but I think this is ok, too.”

The elevator jolted to a halt as it reached the seventh floor. The doors slid open with a swoosh and a “bing.”

“Good-bye, Mr. Ford.” I called out, hoping I didn’t sound too goofy.

He turned and put a hand out to stop the doors from sliding closed. “Harrison,” he said with a smile, then removed his hand. The doors closed and all I could see was my own smiling self reflected in the chrome.

No one was ever going to believe this.

I think he would be just that wonderful and dreamy in real life. (except he'd also be saving your life. He seems to save a lot of people)! :)

I love this sentence "I stopped dragging it and picked it up, shaking it for a second as if it were an insolent child dragging its heels." So perfect and evocative!! --Lisa

Lisa, that's exactly how I dream of meeting him one day. Thanks for the compliment on my writing. I wanted to evoke how frustrated I was with the darn suitcase, and about any mother I know would relate to having to drag a child along at some time in their life, eh?