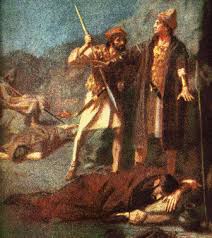 The Ziphites feared David and betrayed him by urging Saul to pursue him in their territories. However, when David learned on Saul's arrival of an army of three thousand men, he discovered the location of the camp.

Abishai joined David in spying out the camp at night. They discovered Saul asleep with the army commander, Abner, resting nearby.

Although Abishai thought that this would be an opportune time to kill Saul, David rebuked him, pointing out the Saul was the Lord's anointed. David tells Abishai that this is not the time or the means by which he will come to the throne. He tells him that Saul's life is in God's hands. God will work in His own way and in His own time to fulfill His promises in David's life. David will not be the instrument of Saul's destruction. He knows that God brought Saul to the throne, and only God can remove him from that position.


So, once again, David spares the life of the Lord's anointed. Instead, David took a spear the was stuck in the ground at the king's head along with the king's water jug. He left without detection because the Lord had caused Saul and all his men to fall into a deep sleep.

David could have killed Saul and Abner, but he would have disobeyed God and sent into motion possible cycles of vengeance and assassination. Instead, he took a spear and water jug, showing that he could have killed the king but had not done it. And, he made the point that he had great respect for both God and God's anointed king. When you need to make a point, look for creative, God-honoring ways to do so. It will have a more significant impact.

David crossed to a distant hill and called out to awaken Abner. He challenged him to consider his lapse in protecting the king, Saul. When Saul realized that David had taken the spear and jug, he regretted unjustly pursuing David.

Saul heard David's voice and recognizing that David spared his life again, calls him "son." David pours out his anguish before Saul. He proclaims his innocence, proven and cemented by David's mercy towards Saul's life. He told Saul the he'd been driven away from the inheritance the Lord gave his tribe and family, and in being forced from the Promised land, he'd been excluded from worshipping God. Because of Saul seeking David, he'd cut him off from the very promise which God had brought His people out of Egypt. David begs to be allowed back into the land of God's people.

David questioned all the possible causes of Saul's enmity toward him. Could it have been David's own fault? What have I done, and what wrong am I guilty of? David asked. (v. 18) Could other people have been the instigators? If so, May they be cursed before the Lord (v. 19) Could it somehow have been God's doing? If so, May he accept an offering, said David (v. 19) The one option David did not identify proved to the the real cause: Saul's sin. (v. 21)

Aware of David's righteousness in the face of his own sin, Saul admits his foolishness and asks David to come home. Saul's heart seemed to turn, even to the point of indicating David will triumph in the end. However, David held no hope the he would escape Saul's wrath.

He believed that because David had spared the Lord's anointed that the Lord in turn would deliver David. Saul confessed a second time that David would triumph.

Some scholars hold that this account is a retelling of how David spared Saul's life at En Gedi. While there are a number of similarities, David's different responses show that the two stories are distinct incidents.

As a result of En Gedi and the encounter with Nabal, who foolishly refused to respond kindly to David for protecting his flock, David realized that God would care for him.

David left Judah for a life among the Philistines in order to avoid further contact with Saul.