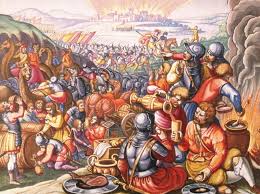 For the second time, David sought refuge from Saul in Philistine Territory. The once great conqueror of Philistines now had permission to live under to protection of King Achish of Gath. Previously, David had acted insane in front of this king. Evidently, Achish had forgotten that incident or had overlooked it in light of David's current situation. Achish certainly would have known about the split between Saul and David and would have been glad to shelter this Israelite traitor. In return, Achish would have expected military support from David and his 600 warriors. David further strengthened his position with Achish by leading Achish to believe that we was conducting raids on Israel and by pretending loyalty to the Philistine ruler.


Saul finally stopped pursuing David. His army was not strong enough to invade Philistine territory just to seek one man. Besides, the immediate threat to Saul's throne was gone while David was out of the country.

David goes to Achish and asks for a city, Ziklag, in which he and his man and their families can make a home.

"If he has found favor with the king, let a place be assigned. Why should your servant live in the royal city with you?" -- 1 Samuel 27:5


While David stayed in Gath, he conducted numerous raids. David probably conducted thesis guerrilla-style raids because these tribes were known for their surprise attacks and cruel treatment of innocent people. These desert tribes were a anger not just to the Philistines, but especially to the Israelites, the people, David would one day lead.

So, here stands David, God's anointed, declaring himself to be the servant of a pagan, idolatrous king. by relying on his own wisdom and trusting his own review of his circumstances, David has enslaved himself to sometime far darker that his life on the run from Saul. Saul is no longer chasing him, but David compromises his integrity for an illusion of peace and safety.

At one point, Achish asked David to go into battle with him against Israel. David agreed, once again pretending loyalty to the Philistines. Whether he would have actually fought Saul's army we can't know., but we can be sure that his ultimate loyalty was to God and not to Achish or Saul.

Achish trusts David so implicitly, he makes David his personal bodyguard. He lives in the city of Ziklag for 16 months. It is a time of silence between David and God. There are no recorded psalms or prayers during this time. David seems to be relying on his own strength, making his own way to escape the unending wrath of Saul.

During this time, the Philistines, see the Saul's army is deteriorating and determine it's the right time to attack.

David fears he will be forced to fight against his own people. God intervenes. As Achish prepares to face the Israelites with the Philistine army, the other commanders grumble about  David's presence. They refuse to allow David and his men to participate in the battle. Despite his praise for David, Achish sends them away from the battle site David and his men probably breathed a sign of relief as they returned him to Ziklag.

When David and his men returned home, they found smoke billowing from Ziklag. The Amalekites, knowing David and his men would be away with the Philistine army, mounted a daring raid. They captured all the women and children of Ziklag, including David's two wives. David and his men are overcome with grief and sorrow. They weep until their tears run dry.

Filled with bitterness and despair, the men begin to turn on David and talk of stoning him,. David stands utterly alone.

David and his men successfully mount a rescue with the help of an Egyptian slave. They save all of the women and children. He divides the plunder among all the men, as as making a fight to the elders of Judah.

While David and his men are chasing the Amalekites that captured their families, an important battle is taking place between the Israelites and Philistines on Mount Gilboa. In one tragic day, Saul watches the Philistines kill three of his sons, including David's beloved Jonathan. Mortally wounded, and without the help of his armor-bearer, Saul finally falls on his own sword and dies. 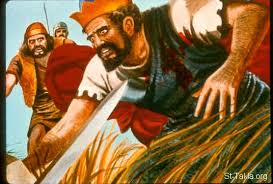 Saul faced death the same way he face life. He took matters into his own hands without thinking of God or asking for His guidance. If our lives aren't the way we would like them to be now, we can't assume that change will come more easily later. When nearing death, we will respond to God the same way we have been responding all along. Coming face to face with death only shows us what we are really like. How do you want to face death? Start facing like the way right now. 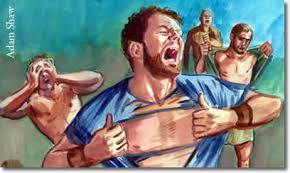 On the third day, David hears of Saul's death from an Amalekite, claiming to have killed him. David and his men mourn the loss of their king, then David has the Amalekite struck down for killing the Lord's anointed.

At this time in David's life, he writes Psalm 18. He describes God as: Rock, Fortress, Deliverer, Sheld, Horn of my Salvation, Worthy of Praise, Savior

Psalm 18 is a song of relief, praise, victory, and the overwhelming awareness that God has made the difference in David's life.He remembers the number of times God's hand reached down and snatched him from destruction and death. He exalts the Lord for moving on his behalf, bringing him to a place of safety and rejoicing. David clearly understands the it is by God's strength, purpose and love that he now stands poised to take the throne. He exalts the Rock and Shield, who has blessed him and proceed him, and stands in wonder and praise before then heart of God.

Next in the King David Series: David's Ascent to the Throne