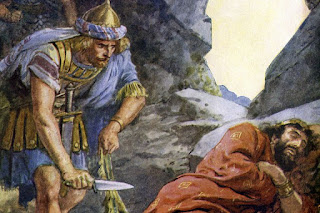 David has been on the run from Ramah to Nob to Gath, Adullam, Mizpah and more. Saul's pursuit is relentless. Finally, David escapes to the Desert of En Gedi. David's running can be reflected in Psalms.


"How long, O Lord? Will you forget me forever?How long will you hide your face from me?How long must I wrestle with my thoughtsand every day have sorrow in my heart?How long will my enemy triumph over me?"-- Psalm 13:1-2

"Hear, O Lord, my righteous plea;
listen to my cry.
Give art to my prayer --it does not rise from deceitful lips.May my vindication come from you;may your eyes see what is  right."-- Psalm 17:1-2

"My God, my God, why have you forsaken me?Why are you so far from saving me,so far from the words of my groaning?O my God, I cry out by day, but you do not answer,by night and am not silent."-- Psalm 22:1-2


EnGedi means "fountain of the kid." It is an oasis with a perennial spring that lies on  the western shore of the Dead Sea. The area rises about 650 feet into the mountains forming a perfect strategic place for David to hide.

When Saul returned from his pursuit of the Philistines, he was told where David was hiding. He took three thousand of his men to look for David near the Crags of the Wild Goats.

Taking a moment to relieve himself, Saul went inside one of the many caves. What he didn't know was that David and his men were hiding in those very caves.

David's men urged him to kill the king, but David chose to trust God's providence. However, he quietly cut off the hem of Saul's garment. David later regretted doing hit, however, because the hem was symbolic of Saul's position as the Lord's anointed.

God uses this moment in the cave to reinforce in David's heart the need to wait on His timing, to secure David in the promises of God that surround him, and perhaps, one more time to try ago reach the stone heart of Saul.

Revealing the tenderness of his heart toward God, David is conscience-stricken for even approaching the king. He understand in a very profound, personal way the significance of being chosen by God. He sees clearly that his own life is in God's hand. Saul's can be no different.

Once Saul left the cave, David called out to him and showed the hem as evidence of his innocent intentions toward the king.

Saul openly admitted his sin against David and confessed with his own mouth that the Lord had chosen David to be king.

"You are more righteous than I," he said. "You have treated me well, but I have treated you badly. You have just now told me about the good you did to me. When a man finds his enemy, does he let him get away unharmed? May the Lord reward you well for the way you treated me today. I know that you will surgely be king and that the kingdom of Israel will gee established in your hands. Now swear to me by the Lord that you will not kill off my descendants or wipe our my name from my father's family." -- 1 Samuel 24:17-21

David gives his oath to Saul. Then Saul returned home, but David and his men went up to the stronghold.

Even though Saul admitted to personal guilt and publicly proclaimed the inevitability of David's kingship, David still could not trust him. There is no record here of reconciliation. David knew he needed to keep a safe distance from the unstable Saul.

"Have mercy on me, my God, have mercy on me,for in you I take refuge. I will take refuge in the shadow of your wings until the disaster has passed.
I cry out to God Most High,to God, who vindicates me.He sends from heaven and saves me,rebuking those who hotly pursue me --God sends forth his love and his faithfulness."-- Psalm 57:1-3

Hiding in a cave, David finds the words of Psalm 57 going up to God. Saul is hotly pursuing him, but David determines to find refuge in the shadow of the Lord. He hides himself in God, allowing the Lord to be his shield and protector. He waits and rests in  the peace and safety of God's love until the disaster passes.

David shows us our first, best move when sorrow, danger, crisis or struggles come upon us. We must hide in the shadow of God's wings and find our refuge in His grace. Enfolded close to His heart, we will be safe and find the peace we need to face the moment.

David is confident of the work of God in his life. He cries out to God who fulfills His purpose for him. David believes God's promises, opening his life up to God's work in him. David trusts that the Lord will use all the circumstances in which he finds himself to bring about His will in David's life.

"Being confident of this, that he who began a good work in you will carry it on to completion until the day of Christ Jesus." -- Philippians 1:6

Each day, God shapes your life to look a little bit more like Jesus. You can be confident that He who began this good work in you will bring to to completion. Spend your days hiding yourself in the shadow of His wings; praising His love, glory and faithfulness; and crying out to the One who fulfills His purpose in you.

David relies on God with each step he takes to evade Saul in the wilderness.