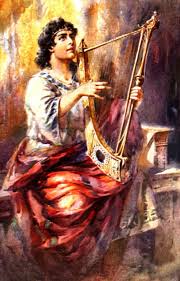 God empowered David's mind and muscles to bring future deliverance for the nation of Israel. When the Spirit of the Lord came upon David, it left Saul.


For David, it was a seal from God, denoting His ownership and a deposit guaranteeing David's inheritance in the heavenly realms.


However, without God's Spirit in Saul, he became depressed, hopeless. These feelings probably were the reason for Saul's fits of rage.


However, it has been suggested that without God's Spirit, it left Saul vulnerable to a demonic influence.

1 Samuel 16:14 "Now the Spirit of the Lord had departed from Saul, and an evil spirit from the Lord tormented him."

Even though God rejected Saul as king, remember that God wanted Saul to belong to Him. In the midst of heavy darkness flowing from Saul's rebellion, God continued to call Saul to repentance and redemption.

1 Samuel 16:15-23 Saul's attendants said to him. "See, an evil spirit from God is tormenting you. Let our lord command his servants here to search for someone who can play the harp. He will play when the evil spirit from God comes upon you, and you will feel better."
So Saul said to his attendants, "Find someone who plays well and bring him to me."
One of the servants answered, "I have seen a son of Jesse of Bethlehem who knows how to play the harp. He is a brave man and a warrior. He speaks well and is a fine-looking man. And the Lord is with him."
Then Saul sent messengers to Jesse and said, "Send me your son David, who is with the sheep." So Jesse took a donkey loaded with bread, a skin of wine and a young goat and sent them with his son David to Saul. David came to Saul and entered his service. Saul liked him very much, and David became one of his armor-bearers. Then Saul sent word to Jesse, saying, "Allow David to remain in my service, for I am pleased with him." Whenever the spirit from God came upon Saul, David would take his harp and play. Then relief would come to Saul; he would feel better, and the evil spirit would leave him.


Music is powerful. It has the ability to teach the mind, soothe the soul, refocuses the heart, and move the body. Our music on earth is but a reflection of the music that fills heaven. - Casandra Martin - "Echoing His Heartbeat, The Life of David"

Do you use music to help you cope with your varying emotions and moods?

Music also can be an effective coping strategy. We can listen to music that elicits emotions we want to feel in a given moment. If we feel lazy and unmotivated, maybe a playlist of uptempo, energetic songs would be a helpful way to change our mood. It could be interesting to create playlists based on various emotions so they’re within reach as desired.

In summary, while music can move us in an acute emotional moment, it’s also notable that it can be used to elicit underlying emotions and teach us about unconscious elements of our emotional structure. If we notice a pattern of emotional music that raises questions about current feelings or about who we are, it could be a worthwhile opportunity for self-exploration. - How Music Impacts Our Emotions

1 Peter 2:9 describes the songs that should define us. "But you are a chosen people, a royal priesthood, a holy nation, a people belonging to God, that you may declare the praises of Him who called you out of darkness into His wonderful light."

The reason we are chosen is so we can exist so people can say, "What a great God!"

By identifying with the powerful impact of David's music, imagine what your life would be like if you used music for its highest purpose - focusing your mind and heart on God.

Zephaniah 3:17 "The Lord your God is with you, He is mighty to save. He will take great delights in you, He will quiet you with His love. He will rejoice over you with singing."

This is your challenge. Choose songs about Jesus or listen to music that glorifies God. Work to incorporate praise music in your day-today activities and family time. You may experience resistance. Satan. Satan doesn't want you to use music to focus on God.

Sing songs that declare the wonder and glory of God. What a Great God!!


The King David Series continues. Up Next: David vs. Goliath

Remarkable things here. I'm very happy to peer your post. Thank you a lot and I'm taking a look ahead to touch you. Will you please drop me a mail?
http://studytip.eu

thank you, I'm glad you are enjoying the series... I hope you continue to visit