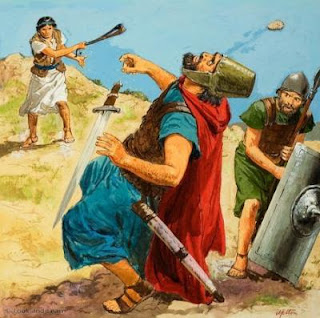 Do you remember the story of David vs. Goliath?

How many of you are old enough to remember the Sunday morning cartoon of Davey and Goliath? It was a claymation cartoon that started in 1960 and ended in 2004.

"In this stop-action animated series, young Davey Hansen and his best friend (and dog) Goliath live ordinary suburban American lives. In each episode, Davey and Goliath experience some form of moral conflict either in themselves or in their friends. Drawing upon the guidance of his parents, his teachers, and his own religious beliefs, Davey doesn't always do the right thing, but he does always come away from the experience having learned valuable moral and life lessons."

The version in the Bible is not about a boy and his dog.

Even though the prophet, Samuel, had anointed David to become the next king of Israel, he was still too young and had much to learn. God would teach David many lessons before becoming king.

Saul remained king even though he'd been stripped of God's Spirit and Samuel's counsel.

Saul took his army to battle the Philistines. Each army stood on the top of an opposing hill with a valley between them.

Goliath, the champion of the Philistines, taunted Saul's army to send out a man to fight. In ancient times, wars were sometimes decided through champions from each side who met in combat in a location between the armies. It was thought that the outcome of the fight was controlled by the warrior's gods more than by the military strength of the two sides.

Goliath was over nine feet tall, massive, and extremely intimidating. Saul's army reacts with terror and dismay.  No one comes out to meet Goliath's challenge for forty days.

Was it coincidence that David appears on the battlefield to hear Goliath's latest challenge?

No, not at all. Once again, God's plans are set in place.

Jesse, David's father, sends him with food supplies for his brothers fighting in Saul's army. He gives the food supplies to to the keeper of supplies and runs out to the field and greets his brothers. While there, he hears Goliath's shouts.

The men in the army tell David that that Saul promises great wealth to the man who kills Goliath, his daughter, and the victor's family tax exemption.

David is disgusted that no one has defeated this disgrace to Israel who defies their Lord. David's oldest brother, Eliab, is angry that David is on the field and presumptuous enough to speak out. As the oldest of all David's brothers, Eliab was upset that he'd been passed over by Samuel during David's anointing.

Despite Saul's army losing faith in the size of their God and fearing the size of Goliath, David does not. David understands that God is everything -- He is ever-present, ever-powerful, and ever-watchful. He knows his God and knows that nothing is impossible for Him.

David tells the soldiers near his brothers that he can fight. He's overheard, a message is sent to Saul, and Saul sends for David.

"David said to Saul, "Let no one lose heart on account of their Philistine; your servant will go and fight him." - 1 Samuel 17:32

"Saul replied, "You are not able to go out against this Philistine and fight him; you are only a young man, and he has been a warrior from his youth." - 1 Samuel 17:33 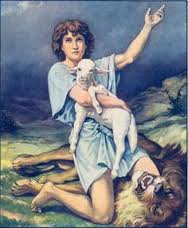 David convinces Saul by telling him that he'd been keeping his father's sheep, he'd fought a lion and bear and he'd kill the Philistine who defied the armies of the living God. David convinces king Saul that the Lord has prepared him for this moment. God had tested David's courage, given him the opportunity to use his strength, and taught David to depend on Him in times of trouble.

Saul is convinced. He dresses David in his own tunic, puts a coat of armor on him and a bronze helmet on his head. However, David can't walk in this gear, so he removes it all, picks up his staff, chooses five smooth stones from the stream and put them in his pouch,  and walks toward the Philistine, Goliath, with his sling in his hand.

David doesn't see a giant monster who intimidated Israel's army for forty days, he sees only the size of his God. He sees the victory before the battle has ever begun. His words to Goliath are:

"You come against me with sword and spear and javelin, but I come against you in the name of the Lord Almighty, the God of the armies of Israel, whom you have defied. This day the Lord will deliver you into my hands, and I'll strike you down and cut off your head. This very day I will give the carcasses of the Philistine army to the birds and the wild animals, and the whole world will know that there is a God in Israel. All the Lord saves; for the battle is the Lord's, and He will give all of you into our hands." - 1 Samuel 17:45-47

This is a lesson we can all learn. Our faith can be strengthened by the power of God's promises. Nothing is hidden from God's sight. He knows not only what is happening today, but what will be tomorrow. We must remember that our God is bigger than any problem, any struggle, and any circumstance. This helps us to face our giants and keep those distorted, dark, discouraging moments in perspective.

The battle was over in seconds. The Philistine, Goliath, moved toward David, intent on attacking him. However, David ran toward the battle line, reached into his pouch, removed a stone, put it in his slingshot and slung the stone toward Goliath hitting him in the forehead.

"So David triumphed over the Philistine with a sling and a stone; without a sword in his hand he struck down the Philistine and killed him." - 1 Samuel 17:50 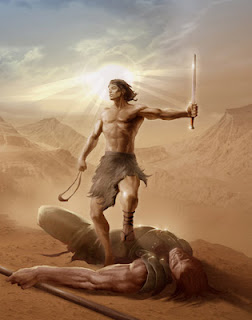 The Philistine army runs away and the Israelites army wins the day.

David took the dead Philistine's sword, cut off his head and took it to Saul. Saul asks about David's lineage. David tells him he is the son of Jesse of Bethlehem, Saul's servant.

The battle is not between us and Satan, it is between Christ and Satan. In the spiritual struggle between good and evil, Jesus has already won the battle. If we align ourselves with Jesus, then His victory is ours.

Next in the King David Series: Saul Fears David.