Fun Word to Say-Not so Much Fun to Do 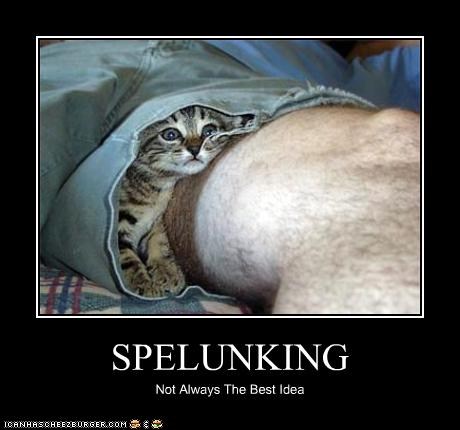 Spelunking. Just saying the word makes you want to giggle and smile. Spelunking.  Say it three times fast. What does the word mean to you?

If you are in the "know" you might be aware that spelunking is another term for cave exploration. Something I just can't wrap my head around.

Now, I know some caves are hundreds of feet wide, deep, and enormous. Call me crazy, but to have squeeze my body through tight narrow passages to get to the view just isn't worth it in my opinion.

And, I'm not speaking from someone who has never tried it, either. I've bee there, done that, and would rather not again.

I think my first trip underground was at Iron Mountain in the Upper Peninsula of Michigan close to the Wisconsin border. It was a family vacation and one of those things that had to get checked off on the list of things to do. I didn't have much choice.

I remember riding into the mine on old miner's trains transferred to little cars with  seating arrangements. The ride was dark except for the headlight at the front of the set of tiny cars.
Overhead we could hear screeching and fluttering. "Just bats." Our tour guide spke with bored authority. Not the beginning of a great trip for me.

I feared enclosed spaces a lot earlier than that. A string of mean babysitters and older cousins who thought it fun to put you through narrow cardboard tunnels and not let you out no matter how much you screamed or begged.

But who can be afraid of something called "spelunking"?

Colossal Cave near Tucson, AZ was my next trip underground. No longer a child, and an adult woman with three children I gave in to the wheedling of my first husband and tried again. I shivered and sweated and screamed in the darkest parts of my mind but I completed the tour.

Anyone ever hear of Carlsbad  Caverns? Yeah, me too. Thank God they've been closed both times I've been dragged there.

Now, I bring this particular topic up not just because it's five a.m. And I can't sleep, but probably can't sleep because we are going on vacation soon and a trip through Yellowstone National Park is on the agenda. The placed is probably riddled with caves. How much you want to bet my husband is going to want to explore one or two?

Well this very adult woman who now that she is in her fifties thinks I can do whatever I do or do not want to do will not be spelunking on this vacation. No matter how much hubby begs. Which he probably won't because he's so supportive and caring. But, he might go on his own which will still scare me but at least I can wait outside - above the ground - in open space. I'm sure they have really nice gift shops.

I'm with you!! Definitely stick with the gift shops! You won't go wrong there (or run into any bats!) --Lisa

I'm on the fence. I love the plain easy cave tours. The idea of navigating one on my own is terrifying. I prefer good old open air, thanks!

I talked to Hubby. He says there are no caves in Yellowstone, so we shall see. He did say we'd be going into canyons, which I can handle. Open air above. Whew!