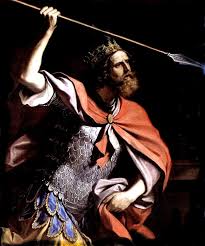 Without God's anointing, Saul became a bitter, angry, paranoid and desperate man. A man with much to lose; not knowing he'd already lost what was most precious - his daughter, Michal, his beloved son, Jonathan, and God's protection.

Saul made David his enemy. Saul even told his son, Jonathan, and all his attendants to kill David.


"When Saul realized that the Lord was with David and that his daughter Michal loved David, Saul become still more afraid of him, and he remained his enemy the rest of his days." -- 1 Samuel 18:28-29


Even though Saul threw a spear at David twice before and missed, he wasn't beyond attempting to kill him again. Jonathan warned David that his father, Saul, was looking for a chance to kill David. Jonathan even tried intervening with his father on David's behalf.


"Jonathan spoke well of David to Saul his father and said to him, 'Let not the king do wrong to his servant David; he has not wronged you, and what he as done has benefited you greatly. He took his life in his hands when he killed the Philistine. The Lord won a great victory for all Israel, and you saw it and were glad. Why then would you do wrong to an innocent man like David by killing him for no reason?'" -- 1 Samuel 19:4-5

Saul swore to his son that David would not be put to death, but an evil spirit came over him in the form of depression and gloom. Saul felt hopeless, sending him into fits of rage. Saul tried to kill David because he was jealous of David's popularity, yet David continued to protect and comfort Saul.

While Saul's popularity made him proud and arrogant, David remained humble, even when the entire nation praised him. Although David succeeded in almost everything he tried and became famous throughout the land, he refused to use his popular support to his advantage against Saul.

Saul sent men to David's house to kill him. However, Michal, David's wife and Saul's daughter, warned him to run for his life, else he be killed. Michal even went as far as putting an idol with a goat's head in their bed in an attempt to fool the men; giving David more time to flee.

David fled to Ramah to Samuel; telling him everything Saul attempted. Word got back to Saul of David's whereabouts. Saul sent more men after David, and even went himself, but each time, the the evil spirit came over him, causing him to rave and babble; thus unable to kill David.

David went to Jonathan and asked him how he had wronged Saul and why Saul was trying to kill him. Jonathan assured David, that Saul did nothing without informing him, so he would know if and when Saul sought to kill David. Jonathan swore an oath to David.


"Then Jonathan said to David, 'I swear by the Lord, the God of Israel, that I will surely sound out my father by this time the day after tomorrow! If he is favorably disposed toward you, will I not send you world and let you know? But if my father intends to harm you, may the Lord deal with Jonathan be it ever so severely, if I do not let you know and send you away in peace. May the Lord be with you as he has been with my father. But show me unfailing kindness like the Lord's kindness as long as I live, so that I may not be killed, and do not ever cut off your kindness from my family -- not even when the Lord has cut off every one of David's enemies from the face of the earth.'" -- 1 Samuel 20:12-15

To Jonathan, truth always guided loyalty. Jonathan realized that the source of truth was God, who demanded his ultimate loyalty. It was his relationship with God that gave Jonathan the ability to deal effectively with the complicated situations in his life. He was loyal to Saul because Saul was his father and the king. He was loyal to David because David was his friend. His loyalty to God guided him through the conflicting demands of those relationships.

When David learned from Jonathan of Saul's plans to kill him he escaped to Nob, where he received food and a sword from the priest. He then fled to Gather in Philistine territory. When the Philistines became nervous about David's presence noting that David had slain thousands of their people, David acted insane to protect himself. and escaped to the cave of Adullam, where 400 men joined him. This group eventually became the core of David's military leadership.

Saul suspected a conspiracy among Johnathan, David, and the priests. His suspicion came from a report seeing David talking to the high priest and receiving food and a weapon. Saul destroyed everything in Nob; killing 85 priests and their families.

Why did God allow so many innocents to die? Their deaths served to dramatize to the nation how a king could become an evil tyrant. Where were Saul's advisers? Where were the elders of Israel? Sometimes God allows evil to develop to teach us not to let evil systems flourish. Serving God is not a ticket to wealth, success or health. God does not proves to protect good people from evil in this world, but he does promise that ultimately all evil will be abolished. Those who have remained faithful through their trials will experience great rewards in the age come.


"Blessed are you when people insult you, persecute you and falsely say all kinds of evil against you because of me. Rejoice and be glad, because great is your reward in heaven, for in the same way they persecuted the prophets who were before you." -- Matthew 5:11-12

This begins the years of Saul's pursuit of David, and David's years in exile.

Next in the King David Series: David on the Run.